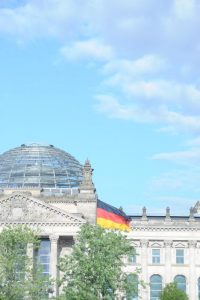 [30 June 2017] This morning, marriage between people of the same gender was approved by the German federal parliament. Up till now, gay couples could register a civil partnership, but this granted fewer rights than marriage. So, for example, married couples may adopt, while those in civil partnerships may not. The Council of Europe’ s Commissioner for Human Rights has pointed out that

“There are arguments in favour of providing access to civil marriage to same-sex couples. One is to ensure that the rights available to same-sex and to different-sex couples are truly equal….”

The Chancellor Angela Merkel, voted against the measure herself. It’s surprising to some, as the path to today’s vote was opened by her comment in an interview less than a week ago, that gay marriage should be a matter of conscience. But why is it surprising? Is is so that we assume leaders only permit votes they expect to win? In contrast, easing the way for a vote which may not go the way one wants, may be the sign of a truly well-functioning democracy. Imagine the alternative: a leader only permits members of his or her party to vote in line with his or her preference. Does that not smack of autocracy?

I have a lot of respect for any politician who can bear to lose some, who can strategise as to which goals are the most important. In this case, it may be that Angela Merkel wanted to eliminate any election pressures about gay marriage. But her reasons are less important than the fact that this vote meant a national leader giving space for the elected representatives to vote in accordance with the plurality of views which make up Germany, and most societies.

Somehow, though, many of our expectations have become ones of leaders who try to control others, who want only their own views in societiy, or who would prefer not to give the space for democracy. Authoritarian regimes can be described as having no distinct state ideology and grant some amount of freedom (e.g. economic and cultural) as long as their rule is not jeopardized. Totalitarian regimes, in comparison, are defined as those for whom the goal is a specific ideology. Authoritarian regimes aim at keeping power and gaining wealth, at the cost of the country and its population. Have we lost sight of what democracy might actually look like? Let us haul ourselves back the brink of accepting controlling leaders who may become autocratic. Let us celebrate the vote and space for diverse views and for democracy!