[28 January 2016] The Council of Europe’s assembly of national parliamentarians has gathered this week in Strasbourg for a week of debating resolutions. The resolutions focus on human rights, democracy, and the rule of law among the 47 countries which are members of the Council of Europe. Terrorism and migration are both very big topics on their agenda.

Terrorism is currently breeding fear and stimulating isolationist movements in many countries, including several within the European Union. (All EU Member States are also members of the larger Council of Europe.) The very lack of boundaries around the object of our fear makes it difficult to capture as a specific feeling stimulated by specific events which can be addressed in a specific way.

You may have heard that many people fear flying, despite the fact that death in road traffic accidents is much more common. Airline crashes make the news, while traffic accidents are less fully and less frequently reported. We suffer from an observer bias, concluding that the stories we read about are common, and the ones we do not see in the media, are not common. 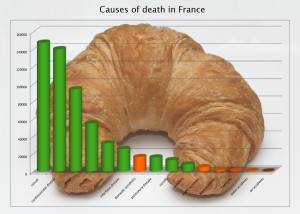 Let’s take France as an example. In 2010, 540,000 people died in France (out of a total population of more than 65 million). Recent statistics show that nearly a third of the deaths in a year (147,500) in France are from cancer, with nearly the same number of people dying from cardiovascular problems. So, as the green bars in the graph here show, most deaths are from disease. Despite this, the media does not often cover stories about cancer or diabetes deaths.

What about violence? Murders killed 743 people in France in 2011 – this was less than one quarter of one percent of the deaths that year. A third of the murders were classified as domestic violence. Suicide accounted for 2.4% of deaths in the year reported, which amounted to 12,900 lives lost.

I am not attempting to ignore the shock and grief that people feel when they lose someone they know. But there seems to me to be something wrong with our thinking: We think we can control other people, whereas blood sugar and heart health seem less controllable. And yet, it is not only terrorism that threatens us. For example, one tragedy which is burned into my memory is the crushing of football fans in a Brussels stadium in 1985: a tragedy caused by a combination of human foolishness and stupidity, in which 600 people were injured and 39 people killed.

In our societies it does not seem unreasonable to expect to be able to enjoy a concert, ride on the metro, or watch a football match, and afterwards come home safely. And this is certainly a measure of the relative luxury of the mutual security built up through the cooperation and conventions of the Council of Europe and the European Union. This expectation has not been reasonable in the past in Europe, just as it is not true in many other parts of the world. However, we should also recognise that this expectation ignores that trees fall, ice coats roads, that a driver might be briefly distracted, or that an electrical connection might short and burn. Rather than allow ourselves to be debilitated by fear, we ‘forget’ about the risks – just like the Ukrainian deputy in the Council of Europe who mentioned having felt safe in Israel until she witnessed a politically motivated attack. Alternatively, another normal human response is to manage our fear by responding with aggression.

And so fifteen countries are participating in bombing Syria, and, for many, the feeling of insecurity sparked by the recent attacks in Paris, are sufficient cause. Some kind of myopia leads whole populations to focus on the awful feeling of fear at home, and the 137 people, for example, recently killed in Paris, and to support punitive reactions. And yet, as a renowned mediator has said, we can see that bombing does not work – we see the evidence from other countries and know that this does not make the world a safer place.

We know the impact of fear of attack on us here in Europe. The air-bombing coalition led by the US is reported to have killed more civilians (322 out of a total of 4,256 people killed since autumn 2014) than were killed by the attacks in Paris on 13 November 2015 (137, plus 350 wounded). Russian air strikes have killed three times as many civilians as the US forces (1,015 civilians among 3,049 deaths inflicted). And the chaos there must be appalling: Syrian civil society groups have told Human Rights Watch that an estimated 100,000 civilians have been killed in the current civil war, plus another 150,000 people who were engaged in combat. Over a million, for example, are refugees in Lebanon – a quarter of the population of that country.

The rule of law

The debate last night in the Council of Europe took place in the context of Council of Europe Member State France having declared a state of emergency. A range of views were expressed, including concerns about the impact of security-oriented responses to our fear, eroding away the values for which the Council of Europe stands. As one Hungarian parliamentarian noted, ‘If Europe lets people’s minds be poisoned, then the terrorists have won.’

Some speakers based their views on a ‘them and us’ approach. A UK representative stated, for example, that each country must protect its own people first. Others took a more compassionate approach. They asked what happens. Why do these people get radicalised? Why do these young people feel unwanted in our societies? The most illuminating response came from a reference to a French academic, Olivier Roy, who has looked from a different angle at the phenomenon of young people choosing terrorism. We often say that it is Muslims becoming radicalised. This, of course, makes each Muslim a potential risk and is stimulating Islamophobia in many otherwise peaceful citizens. But Olivier Roy describes the situation as young people who want to take radical action, finding that some Islamic groups offer that opportunity. The internal desire among the young people is thus a constant one – one we have seen, for example, in far-left groups in the 1970s in many countries in Europe.

Let’s consider that the European people who decide to become involved in violence today are responding to social pressures such as not feeling welcome in any country, or whatever psychological factors might predispose someone to radicalism. People often do foolish things – think again of the football fans who caused the crush in Brussels in 1985. Or your own history. Human rights depend on the concept of humanity, which incorporates compassion for other people.

The Council of Europe Committee of Ministers has published an Action Plan which includes working to ensure that our European societies are inclusive. Governments may develop appropriate education and employment policies. But inclusive societies are ultimately ones where we speak with one another, in which we address our neighbour as a friend and not as a foreigner who might attack us. It is up to each of us to make our society inclusive.

Update: Politico published a similar article in June 2017 which may be of interest.