[25 January 2016] We are living in times of upheaval and crisis. Here in Europe, one of the hottest debates now in 2016 is refugees, and how many can realistically be welcomed into our societies. There are reports of attacks by crowds of drunken men on the streets, and stories of grim demonstrations against the incomers on the airwaves and in cyberspace.

The mayor of Amsterdam is announced last week said that two sexual assaults may have been committed by refugees during a recent five-month period. Why did the mayor take this step? To counteract accusations that the Amsterdam police are hiding the incidence of crime committed by refugees. Is this a lot? In 2014 there were 402,300 sentences handed down after conviction in the Netherlands; so two cases in five months involving refugees is very few.

I have been searching for more facts on the Cologne incidents on New Years’ Eve, and more clarification of whether the main culprits were refugees, just foreigners, or just drunken men. It is surprisingly difficult to find anything besides speculation and assertion in opinion pieces, some of it qualifying as incitement to hatred. And yet, as some commentators have pointed out, European men have of course also been known to intimidate and harass women – it’s hardly unique to a few particular cultures.

Dutch politician Sander Terhuis, who himself was a refugee from Iran, points out that the rule of law means that everyone is subject to the same law – and there are not special rules for refugees. He also notes that there are cultural differences – especially, for example, with regard to respect for women – which people from cultures which don’t have those values, would have to learn.

We shouldn’t forget that we are talking about human beings, people who have probably been traumatised through war, fear, loss of their cultural milieu, and perhaps by finding that life in their new homeland is more difficult than expected. Our photo-rich media had lead us to believe that most refugees entering the EU are coming by boat, and some versions of facts have developed wild resistance to the concept of floods of Middle Eastern people. And yet the EU agency for its external borders, called Frontex, reports that more illegal residents in the EU are visitors who flew into the EU with a visa that they then overstay. The main nationalities of those outstaying their visas are not explicitly listed by Frontex, although Moroccans, Algerians, and Afghans are mentioned.

In Syria, about 7.6 million people are displaced, and there are 4.2 million refugees in nearby countries – although at least one country, Lebanon, is forcibly returning Syrians into the conflict. In the first half of 2015, 313,000 Syrians are thought to have entered the EU. (The total population of the EU is estimated at a bit over 508 million.)

The EU Member State government representatives as gathered in the Council of the European Union have the right idea – to address the root causes and reduce the numbers of people leaving their homelands. Intra-Syria talks might begin within the next several days, although exactly who will attend is not yet clear. I hope these eventually lead to more explicit peace talks. In the meanwhile, the situation in the country is chaotic and ever-evolvinge, with three major groups warring, Russia backing the government, and US-led airstrikes which are indiscriminate with regard to civilians and combatants. (This coalition includes the US and also the UK, the Netherlands, Denmark, France, Turkey, Australia, and Canada.) People are starving and torture is being used. In general, one can imagine locals wanting to flee. And we European citizens must answer the question: what choices do we make regarding our fellow humans now? 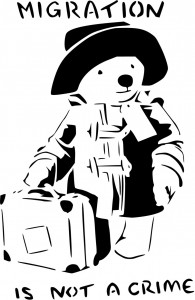 I am currently participating in an integration course for migrants: I am learning German and German culture together with other EU nationals, refugees from war zones including Syria and Afghanistan, other people from the Middle East including an urbane, middle-aged lawyer whose professional qualifications are not recognised here, and even a young person from Belarus.

A German friend has asked me repeatedly what they might teach us regarding German culture – she says she does not know what this is. ‘What is German?’ she says. There are many things here which are new to me, and possibly even more different for people from further away: styles of conversation, insurance that one is expected to have including personal liability, the assumption that one must ask for an exemption from church tax if one is neither Catholic nor Lutheran, for example. That a photograph should be included with a job application here in Germany is shocking to me, because I think discrimination based on appearance should be avoided. Although Germany is of course fairly emancipated regarding the role of women, my husband and I have to explain regularly that we are indeed married despite not having the same surname.

The Jewish Council of Germany has pointed out that it takes time for people to be integrated and to become accustomed to the values of their new homeland, including diversity. That holds for me, too, even coming from a neighbouring country. And it holds for the Syrian school teacher who has been told he must obtain a Master’s degree in mathematics to be able to teach in a primary school here in Germany. But what is the shared culture? If my German friend does not know what it is to be German, it is not surprising that recent arrivals have not managed to take on the values. Perhaps it is time for more thorough consideration of what Europe has become, and in what direction we would like it to develop.

I might be a lone voice in saying that I think Angela Merkel is brave, compassionate, and simply honouring her government’s word. She daily faces masses of men who may ‘mob’ her, albeit with words and generally without inebriation. (If Europe were truly egalitarian, one might expect a few more women in our parliaments, Council chambers, and at Davos.)

The interior ministers of EU Member States agreed quotas only a few months ago, in September 2015, following a EU Commission communication called ‘A European Agenda on Migration’. These quotas were intended to relieve pressure in Greece and Italy, where refugees who had crossed into the EU were gathering. Their implementation was again called for in another gathering of EU national government justice ministers in November. The introduction to ‘A European Agenda on Migration’ points out that migration is not new, the impact of immigrants is complex, and that the current situation is a response to people in need.

Most EU Member States have not met their agreed targets, and some, led by Hungary, have filed suit in the European Court of Justice to bar the agreed quotas. Hungary even prosecutes people for crossing the border illegally, although this contravenes UN opinion and possibly the Geneva Convention. This seems to reinforce rather than work against a risk raised by the EU Commission in their document:

All asylum applications must be processed and protection granted to those who qualify. One of the weaknesses exposed in the current policy has been the lack of mutual trust between Member States, notably as a result of the continued fragmentation of the asylum system.

Germany is one of the only countries honouring its commitment. What has changed since November? Some ascribe the refusal to implement the agreed plan to the Paris attacks. That would be very sad, if terrorism affects the humanitarian response of EU Member States to people who are in peril. We must find solutions to the causes of the flow of refugees, but barricading ourselves behind walls will only increase the divisions between cultures.

Update 29 January 2016: The Parliamentary Assembly of the Council of Europe (a gathering of members of national parliaments from the 47 Council of Europe Member States) passed a resolution calling Member States to “engage in a dialogue with the media about their responsibility to ensure timely and objective reporting on events, including crimes, and to combat hate speech“, among other actions. It also called on objective investigations into these attacks.

On 27 January, Kofi Annan, former Secretary General of the United Nations, wrote: “The failure of the European Union to agree to a common migration policy is leading to a race to the bottom by member states. Attempting to push problems to one’s neighbors is not a sustainable strategy.” We would do well to remember this.