[4 July 2017] The silence of the Quaker meeting was broken by a man reflecting on the joy he heard in bird song. It was spring, in England, and the birds were making themselves known in the trees around the town.

Another person spoke who said she was a biologist. She went on to explain that to her, the spring outburst of bird song evoked knowledge of the competition and territorality of the birds who were marking out their spaces for basic needs such as food and reproduction. Competition, not joy, was the message of the songs.

Having utterly disparate interpretations on the same event is a common problem. It has probably been a problem in human society for as long as humans have spoken to one another. Different approaches have been tried to overcome our myriad perspectives so we could join together into societies, nations, international cooperations, in order to complete tasks which are too big for a single person to do on her or his own. Here in Northern Europe, no one person can individually produce food, textiles to wear, shelter, and so on. We know cooperation enables us to do more, but the best mechanism of group governance is not so clear.

One of the methods tried in the past have included concentration of power – a king, queen, warlord or emperor who made decisions. This had to mean also that there was only one interpretation which was acceptable. The birds are singing for joy, and there is room only for that one perspective.

Appreciation for the simplicity of this approach seems to be almost hard-wired in the human psyche. We know the truth, and so we can be vigorous about defending it. Black-and-white thinking might leave out shades of grey, but we are feel confident about knowing who is our friend and who is our enemy. 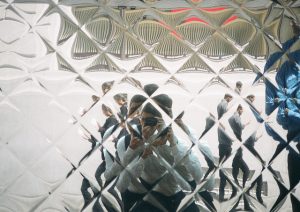 A reaction to the simple approach of black-and-white thinking has been to welcome diverse views. We all have our own points of view, and, without the dictator-king telling us what is defined as true, we may feel able to express our own viewpoints.

The thing about our viewpoints, is that, just like the portions of the glass window in the photo, they are slightly distorted or fragmented. Each of us holds a fragment of what might be called truth, part of the whole but by no means comprising the whole.

I would submit that some of our differences in viewpoints may originate, literally, with perception – what does one person notice visually? The interpretation of what one perceives is then shaped by experience: the biologist in the example above acknowledged her view was filtered through her training. The first speaker’s lyrical interpretation of joy was also the product of a filter , albeit a more common one (as the music of birds’ songs inspires joy in many human listeners). As each of us has a different experience, it is to be expected that we will each have different filters and viewpoints.

It has been the fashion for over a hundred years to value the diverse viewpoints, at least on the surface. This went hand-in-hand with the development of democracy, which can be said to be an attempt to represent diverse viewpoints. It’s a difficult balance, as a government generally is expected to have unitary policies. Today, in some democracies, such as The Netherlands, there are many political parties and the balancing of viewpoints represented means building a governing coalition is very difficult. In others, such as the United Kingdom and the United States, there are two main parties whose alternation in power has meant quite different programmes of policies over time.

The liberal background to democracy has meant that the assumption of the best way to find policies that are supported is discussion and debate, listening and negotiation. The rule of law – protection of the population through courts (interpreting or implementing laws developed over time by elected politicians) – has been an essential element in maintaining consistency over time. And protection of human rights, especially freedom of expression, is another essential element of a country that accepts diverse points of view.

The assumption of discussion and listening, understanding the other points of view in one’s society, can be said to be breaking down. One reason could well be the popularity of social media: Tweets must be short and are thus not very amenable to the nuances of discussion. Insults block discussion; blanket rejections block negotiation. This is exemplified by the attempts to control or reduce Donald Trump’s tweeting – not because he has an audience (as the President of the United States has had broad audiences for centuries), but because his tweets discourage discussion and encourage acceptance-or-rejection. Black-and-white thinking: the king is right or the king is wrong. The birds are expressing joy; there is no room for an alternative viewpoint, even if it is based in science. Or, should the king so decide, the birds are singing out competition, and those who hear joy are simply wrong.

Theresa May’s unpopularity may be caused by the same problem: she is apparently resistent to persuasion… and yet susceptible to 180 degree reversals on policies. She neither negotiates nor is consistent. Those who want to know the leader’s thinking cannot be sure that ‘black’ will remain ‘black’, and those who prefer the discussion of liberal democracy gain no headway with a leader who refuses to adapt positions, once adopted, in response to negotiation and discussion.

One weakness of the liberal approach, tolerating diverse viewpoints, is that we suspect that truth exists and are frustrated by our inability to see it clearly. For example, either God exists or God doesn’t. One of these is true. Either Jesus was God incarnate, or he wasn’t. Although we have different points of view on these topics, and various elaborations of the whys and hows of our specific view, we know that fundamentally, only one of the two possibilities can be true. Since which option is true is not something we can verify, we choose to believe one, knowing all the while that our choice may not be the one that is true.

Thus, there is a tension in accepting diversity. Those people who have concluded that it is a possible task to ascertain the truth, are liable to want to reduce the tension and simply force others to accept what they have identified as truth.

And it is not only questions of religion which ask for belief and cannot be proven. Economic improvement is another example. And the discourse is just as fierce when one side has chosen to believe one viewpoint as the truth. Must corporations focus on profit for shareholders, or benefits to stakeholders? Does cutting taxes for the rich stimulate the economy or simply enrich the wealthy without benefitting the less well-off? We suspect there is a truth, but it is just as unknowable as the truth about God. The discourse is fierce and conflict-ridden. One side insults the other; the discussion and negotiation has come to a halt.

The inhabitants of the world – and, indeed, the people in any one country – have different perspectives. Mine is that black-and-white thinking prevents rather than facilitates finding solutions to problems. We need leaders who can listen and adapt – leaders who honour the multiple perspectives of those they represent.