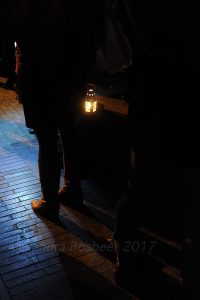 European Union officials have not been shy to express condemnation of US President Donald Trump’s permanent ban on Syrian refugees, and temporary ban on all other refugees. Rightly so. The vice president of the EU Commission Federica Mogherini, intervening in the European parliament, said:

The EU will not turn back anyone who has the right to international protection. This is where we will continue to stand.

But we should not lose sight of what the EU and its member states are actually doing on the ground. Huge resources have been deployed to stop refugees and vulnerable migrants from reaching the EU by sealing the Aegean route from Turkey to Greece, the Balkan route from Greece to Germany, and the Western Mediterranean route from Morocco and Senegal to Spain.

One main route is still out of control: the Central Mediterranean route via Libya. This is not down to a lack of will from the EU to compromise on its fundamental principles by striking deals with regimes with dubious human rights records such as Sudan and Eritrea. It is to do with the ongoing political and military struggle in Libya, which means control over the territory and coastline is fragmented. Libyan coastguards exist on paper but have a rather limited territorial reach.

In late January, ahead of a meeting on February 3 of EU leaders in Malta, which currently holds the presidency of the EU Council, the EU announced that Libyan authorities will step up their efforts to stop migration across the Mediterranean. Thanks also to a €200m cheque from the EU, the UN-backed Libyan government has also agreed to allow EU and NATO ships involved in the anti-smuggling mission Operation Sophia to operate alongside the national military coastguard in Libyan waters. This is where many of the shipwrecks that have caused the deaths of thousands of migrants have happened in the last few years.

Given the ongoing political uncertainty, stopping sea crossings altogether may be out of reach for the time being. What is more likely to happen is that, in order to deliver at least a reduction of migration flows, the Libyan authorities will be prepared to further compromise the human rights of refugees and vulnerable migrants.

In research my colleagues and I have done on boat migration in the Mediterranean, we found evidence of dreadful living conditions among migrants in Libya. Over 75% of the people we spoke to reported experiences of physical violence there, and nearly a third (29%) had witnessed fellow travellers dying. Many interviewees also referred to the direct and indirect involvement of Libyan police and coastguards in such episodes of violence.

If sealing the Central Mediterranean route means to close both eyes to this violence, the situation for refugees and migrants is likely to get even worse in the future. If the enhanced Libyan role in stopping boat migration also involves downsizing the EU’s commitment to search and rescue, migrant deaths at sea are likely to increase, a trend emerging also in the latest International Organization for Migration data on missing and dead migrants in the Mediterranean.

Moral condemnation has been levied by EU politicians against Trump’s plans to build a “physical, tall, beautiful and powerful wall” between the US and Mexico. Mogherini characterised Trump’s wall as the opposite of what the EU stands for with these words:

We have a history and a tradition and an identity based on the fact that we celebrate when walls are broken down and bridges are built.

We heard similar grandstanding rhetoric in 2015. This time the target was an EU member state, Hungary, and the occasion was the construction of a wall to stop refugees crossing via the Balkan route. Again, rightly so, but then like now, EU officials seem to suffer, rather conveniently, from selective memory loss.

In that case, they were forgetting that EU member states had previously built fences using similar technology to Hungary’s in Greece, Bulgaria, and in Calais, France. In fact, EU states have built similar walls since (without the EU’s rebuke) – for example, at the borders between Greece and Macedonia, Austria and Slovenia, and Croatia and Serbia.

So while the rhetoric is certainly diverging between the US and EU since Trump took office, in practice there are many substantial points of convergence between the two sides of the Atlantic as far as the treatment of refugees and migrants is concerned.

What we are witnessing instead is the use of refugees and migrants as a rhetorical device in a war of words that underpins a more substantial geopolitical shift. This is one in which the EU feels threatened on several fronts, not least by a Trump-led US, and wants to position itself as the bastion of liberal democracy in the global battle for hearts and minds.

In a recent letter to EU Council members, the European Council president Donald Tusk discussed the strategic challenges ahead for the EU. He explained:

Only together we can be independent. We must take assertive and spectacular steps that would change the collective emotions and revive the aspiration to raise European integration to the next level.

Early signs are that a number of member states are not prepared to follow the EU lead and are more inclined, whether out of conviction or electoral expediency, to embrace the populist anti-immigration turn championed by Trump.

Nando Sigona, Senior Lecturer and Deputy Director of the Institute for Research into Superdiversity, University of Birmingham

This article was originally published on The Conversation. Read the original article. Republished under Creative Commons license.