On 23 June the UK electorate will vote on whether to stay in or leave the European Union (EU). Many voters will probably be swayed by popular media, which – far from being objective – like to blame all the ills of British society and the British economy on “Brussels”. And there are politicians asserting that Britain can become great again once it is outside the EU. There is a real possibility that a majority of those who take the trouble to go to the polls will vote for “Brexit”, i.e. for Britain to leave the EU.

I happen to be a British citizen. I was born in Portsmouth and have lived most of my life in England. I love my home country, including Wales, Scotland and Northern Ireland as well as England. I feel attached to places where I’ve lived or where I’ve stayed, places which are familiar and where I feel at home. And I love my family and friends, most of whom live in the UK. So I want what’s good for Britain and for the people of Britain.

What are the greatest challenges facing the British people at this time? Top of my list is the threat of catastrophic climate change. Then there is the huge gap between rich and poor which means that a lot of people struggle to make ends meet. And there is the problem of war and violence around the world. Even if one chooses not to care about the welfare of people in other countries such as Syria, violent conflicts around the world impact on Britain in various ways. People are driven to leave their homes, and some of them seek refuge in Britain. And some people see the UK as an imperialist military power and get drawn into terrorist organisations.

In our attempts to meet these challenges, are we in Britain better off within or outside the EU? This is the first of three blogposts considering this question.

I would like to start by looking at the economic dimension. The statesmen who founded the European Communities in the 1950s were seeking peace through prosperity. The Common Agricultural Policy, though fundamentally flawed, ensured that food was plentiful and cheap. I can remember butter mountains and wine lakes (not that I ever actually saw one). The removal of trade tariffs and the creation of a single market have arguably led to increased prosperity. Europe as a whole is a significant economic power in competition not only with the USA, but also with India, China, and other emerging economies. The European Union is a success story from an economic point of view. 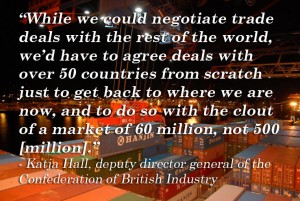 Many of those calling for Britain to leave the EU want the UK to remain part of the single market, which includes the four members of EFTA (the European Free Trade Association) – Iceland, Norway, Liechtenstein, and Switzerland – as well as the Member States of the EU. Participation in the single market is extremely important because around half of Britain’s trade is with the EU. Seven of Britain’s top ten export markets are members of the EU: Germany (2nd after the USA), Netherlands (3rd), France (4th), Ireland (5th), Belgium (7th), Italy (9th), and Spain (10th). Britain could probably negotiate to remain within the single market after leaving the EU, perhaps with a special status akin to that of Switzerland. But I’m mystified as to how such an arrangement might benefit Britain. We would have to abide by all the rules and regulations of the single market, which includes making a financial contribution, but – outside the EU – we would have very little influence over the decision-making. The Centre for Economic Performance (CEP), part of the London School of Economics, estimates that, even if the UK is able to negotiate a free trade agreement with the EU, the economy would shrink by 2.2%.

If Britain were to leave the EU, British exports to third countries such as China (the sixth largest market for British exports) would probably come up against tariffs of 10% or more, since the EU’s trade agreements with these countries would no longer apply to Britain. It could then take up to ten years to negotiate new trade agreements with each of our trading partners. Britain alone would be in a weak position when negotiating with the USA, China, or India. Together with our partners in the EU we are better able to negotiate from a position of strength. The deputy director general of the CBI (Confederation of British Industry), Katja Hall says:

“While we could negotiate trade deals with the rest of the world, we’d have to agree deals with over 50 countries from scratch just to get back to where we are now, and to do so with the clout of a market of 60 million, not 500.” (http://www.theguardian.com/politics/2015/may/14/brexit-what-would-happen-if-britain-left-eu-european-union-referendum-uk)

One other important consideration is the growing global dominance of big business. Multinational companies wield more power than individual states. Workers’ rights and standards of environmental protection need to be defended against the greed of multinational corporations. Standing alone outside the EU, Britain would only be able to compete in the global marketplace by lowering standards where workers’ rights and the environment are concerned. Many people are worried that the Transatlantic Trade and Investment Partnership (TTIP), which is the subject of negotiations between the EU and the USA, is likely to involve finding the lowest common denominator as regards workers’ rights and environmental protection, giving a virtual carte blanche to multinational corporations and enabling them to exploit people and planet for the sake of profit as much as they like. At least the EU as a whole has sufficient bargaining power to stand up to the USA and multinational corporations. Britain alone would be in a very weak position.