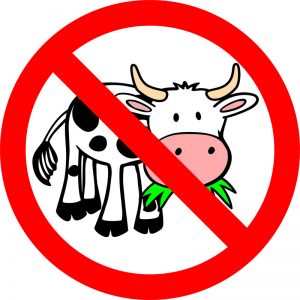 This week, there has been a lot of publicity describing the verbal attacks on The Netherlands, Germany, and the EU by Recep Tayyip Erdoğan, the President of Turkey. I am of the opinion that international relations are best sorted out between people who can speak calmly with each other – thus, diplomats – and so it shocks me that a President of a country would call people from another nation hateful names as Erdoğan has. The situation is not free from black humour, with Erdoğan reportedly stating, ‘we will teach them diplomacy’ before he called Dutch people Nazis. It also tickles my funny bone to hear calls of ‘fascists’ from a President who has arrested tens of thousands of citizens including many journalists and who is currently plans to expand his own powers. The expulsion of 40 Dutch cows certainly invites delicious satire.

However, the habit of conflict instead of diplomacy, is no laughing matter. The verbal insults and hostility of any leader – and Erdoğan is only one example among several – is far from diplomacy. And it is far from the cooperative attitude among allies which has underlain the absence of war in Europe in the last 70 years.

One appeal of populists that supporters often report, is that the populist politicians represents ordinary people and their concerns. This can be unpolished and vague speech, or it can be in reference to giving voice to sentiments which are not considered acceptable in much of society (and thus can be described as a protest against ‘political correctness’). Diplomacy offers a different avenue to violence on streets. Diplomacy is not lack of conflict – it seems to often hinge on a terrible tension between needing one another (for oil, rescues, cheap labour, to buy our products, or to join into a larger union to bulwark against threats) and that we are different. We cooperate with allies but may not love them. One of the fundamental concepts of the European Union – which may not have been robust – was that working together would lead to more tolerance for one another. As anyone who has had a conflict with a colleague knows, this all depends on the balance between irritation and enjoyment. It can be smoothed out with a bit more positive interaction, or it can fester.

My view is that fitting into a certain frame – such as the model of urbane diplomat or quietly competent negotiator – requires us to ignore the base instincts which all we people have. If the positive side wins, all is well. When it festers, the darker instincts may come out – and that is what happens when Turkish-Dutch people riot in Rotterdam and the next day others publish disgusted comments about Turks ‘destroying’ their city.

My concern is that diplomacy – poker faces and negotiation – may be part of a package discarded when citizens rubbish elitism. And yet, it is very difficult to imagine how allies will feel confident and cooperations confirmed, if leaders discard the politeness of diplomacy. It is hard to see how the rough and poorly considered speech of populists will lead to anything but conflict.

The insult-slinging in which Erdoğan has been engaging is hate speech. It evokes that dark side – fears and anger – that we all carry but ignore to varying degrees. Hate speech is not universally defined in various legal systems, but it is generally seen as speech which incites discrimination or violence against groups of people. This incitement to hatred is usually construed as targeting ethnic, racial, or religious groups, or gay people or people with less typical sexual identity. A variety of civil and international initiatives to monitor and educate people about hate speech exist. Because it can be difficult to find the line between hurtful speech and freedom of expression, the European Court of Human Rights has recently developed an informative fact sheet.

There are two reasons that hate speech is important. The first is that we are social and psychological beings, and this means that we can be hurt by words which demean or threaten us. The second is that hate speech sets the scene for other hateful actions, including attacks. For example, a study in Poland has shown decreasing acceptance of Jewish people, and the driver was thought to be increasing anti-semitic hate speech in the internet. The same seems to be true in other countries, as exemplified by recent increases of hate crimes in the UK recorded after the Brexit referendum. Both types of injury -speech as well as violence – create fear, and they create divisions between people in one society. 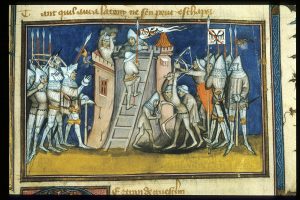 Siege of Melun from BL YT 35, f. 62 – Detail of a miniature of a soldiers during the siege of Melun; some attempt diplomacy, while others mine under walls. Image taken from f. 62 of La chanson de Bertrand du Guesclin. Jean Cuvelier. The British Library – Public Domain

Angela Merkel’s response to the Nazi comparisons was that facile comparisons with Nazis banalises the suffering of their victims. This is pitifully true. Banalising the suffering of others is an element of loss of compassion, and promotion of ego. These against are elements of our common human flaws. We see the canalisation of suffering at work in protests against refugees. Stop, and imagine for a moment, your home (with all your photos and furniture and books and memories) blown up. Just start with that. Here in Europe, we go onto the streets against bomb attacks in metro and bus and Christmas markets – terrible things. So we might have an idea of the actual pain from which refugees have to run.

It is our own community to which we are taking our chisels and hammers. I was amazed recently to hear that the results of the Human Genome Project indicate that 99% of human DNA is shared. All those characteristics which we see as so divisive, such as skin and eye colour and genetic disease, are, if they are determined by genes, from less than 1% of our genes. We have an option. Do we aspire to the smoothness of what might be called civilised conversation – even if other are not? Are we going to strive for compassion, keeping in mind that other people have stories, of fear or discrimination or being told to ‘go home’? There is a bigger goal, which is the benefit of cooperation. There is a bigger threat, which is the horrors of war and conflict. It is up to us to choose the path leading to the future we want.