[2 August 2016] This morning, I walked past a signboard announcing the local newspaper headline of a warning against a terror attack in this touristic and bucolic part of Britain.

A terror attack? The local news online mentioned the risk coming from local police being seconded to other departments as part of a general sense of increased risk of terrorism.

What is terrorism? Well, although there is no generally agreed definition globally, the key feature is the stimulation of fear among civilians. Terrorism depends on terror. It is in our control as to whether we permit the fear of potential terrorism to affect us.

To me, one of the sad features of the recent attacks in Germany, is that there were young men who felt that violent action was a route open to them – perhaps it seemed like the only route. So, for example, although French President Hollande characterised the attack as terrorism, it seems in retrospect clear that it was carried out by a young man who was bullied at school.

That the attack was not in fact terrorism – not instigation of terror among the population for political ends – probably makes no difference to the grief felt by those whose loved ones were killed. However, it does make a difference to the appropriate policy response. A society with too many unhappy or angry people, needs different solutions to one in which violence is being used as a political tactic.

I have heard also that the family of the lorry driver who rampaged through a crowd in southern France, also emphasized his unhappiness – all right, perhaps better described as mental health issues – although the various interpretations describe him as radicalised, recently radicalised, or part of a network.

This attacker was described originally as a ‘lone wolf’, a fairly ordinary person who is seen as socially unsuccessful who is suddenly radicalised. Frank Furedi, a sociologist who has studied terrorism, points out that people who kills those in their own society, such as the shootings in Norway in 2011, “raise fundamental questions about the integrity of the communities that they inhabit…. That they choose to be radicalised into a worldview that is hostile to the values of their society is not experienced simply as an act of betrayal, but as an indictment of society’s failure to give meaning to people’s lives. So the phenomenon of the lone wolf speaks not just to the isolation of these individuals, but also to the relative weakness of the values that are supposed to bind society together.” 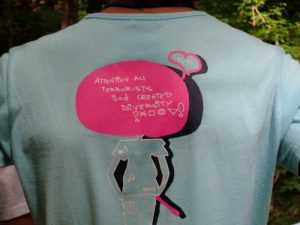