Which meaning comes first to your mind? A conflict or dispute, a verbal exchange of opinions between two people who speak more than they listen? Or is an argument an outlining of the rationale behind a conclusion?

The gradual loss of the second meaning and increased use of the first meaning – argument means verbal conflict – is very possibly part of what is ailing our democracies.

Debate is a form of, well, discussion-with-rules which has come into use in policy-making over the past couple of hundred years. (And the smooth and upward path of political development from Athenian democracy that I learned in school was, not surprisingly, much more complicated, irregular, and diverse in direction than the schoolbook recounting.) It is said (by Wikipedia) that the British parliamentary debate is the best known form of debate. Interestingly, for one like myself who has always been shocked by the ‘boos’ and boisterous lack-of-listening in the British parliament, one of the rules is to stick to the question at hand, and another to avoid demeaning the other speaker(s).

Wikipedia emphasizes that debate relies on factual accuracy as well as logical construction of rationale. As someone who was educate 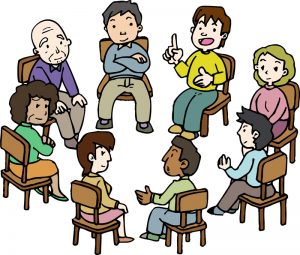 d in a fairly classical (so, elite) manner (but has never debated using formal rules), I’d say that debate is based on an assumption of logic: it is assumed that rationality will eventually allow us to apply logic to come to the best conclusions and make the right decisions.

In a debate, one argues for a point, attempting through the use of logic to show how the conclusion follows from the current conditions. A debating competition is judged by considering argument strategy in responding to the arguments of others, for example, as well as the content of the argument and the style of how one speaks.

Debates have rules to shape their form. It can be confusing that debates are sometimes only about one’s style of convincing others: the debater may or may not agree with the position which he or she is arguing for. Appreciation of this style of debate is somewhat rarefied. It depends on an enjoyment of rather dry interpretations and of holding emotions in abeyance. It doesn’t help that sometimes a debating competition is based on entirely silly premises, for example, whether dogs are better pets than cats. From the outside, it can seem that the debaters are engaging in frivolous topics. A debate format can seem unattractive because it uses unfamiliar rules, depends on dry logic, and focuses on silly topics. It can seem to be a hallmark of the elite.

There are two problems with debate, both of which are fairly crucial. One is that arguments often rely on fallacies, and another that we humans are emotional even when we wish to be solely intellectual.

Logical fallacies are the jumps in logical reasoning which can enter any argument. Reading a list of common fallacies can show how often we encounter (and use) fallacies. For example, the ‘appeal to the stone’ is to simply rubbish an idea. Another fallacy is to create a false either-or choice thereby excluding any other options.

One could say that fallacies are only problematic when one is supposedly developing an argument based on logic. Many of our government institutions have methods which resemble debate and logic: the rule of law, for example, hinges on legal argument. The parliamentary debate implies, by its very name, rational arguments. And thus the common government structures in states claiming to be democratic, make us vulnerable to gaps in debate process. Democracy in some ways assumes that voters function well in the realm of debate. Unfortunately, the contrary is true: we the public prefer those who construct stories, as in H.G. Frankfurt’s depiction of the rise of ‘bullshit’, a style of giving information without reference to facts. 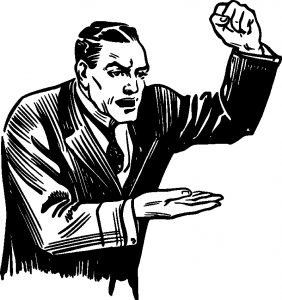 The thing about us humans is that we are ruled by emotions. Even the much-vaunted rationality of economic choices is baseless, as shown by research in fields such as behaviorial economics.

Even among those who are normally well-practised in the art of containing their emotions and relying on reason, there are some problems which have been quite intractable in the dry types of diplomacy. This is in part because the deep emotional issues of security and primal fear are part of our condition. We are made up of bundles of emotions, desires and fears, as well as brains. Fear is not amenable to rational assurances or logical argument. We know this, as we know that the instinctual reaction to threat is fight or flight – neither of which are responses which allow thought to intervene. Many issues in today’s societies have been cast in ways which trigger fear: immigration, terrorism, loss of livelihood. A ‘flight’ reaction may be a comfort to those who say politics does not interest them. A ‘fight’ reaction is rage and activism. Activism looks like democracy – but fear and anger are the emotions on which we are least conducive to listening carefully to others, consider their opposing points of view, and conducting a logical argument.

Ours is a world heavily dependent on economics – something we need (income, jobs) but which is beyond the control of any individual. Not even national policy can control the stock market: rapid falls are reported in the main part of the news, heightening our anxiety, and yet often portrayed as a surprise. Reporting on the stock market sometimes reads like a zoologists report about a large animal – we can’t control it; we can only observe. At the same time, we know our livelihoods or even our lives may depend on this uncontrollable but very important Thing. Powerless and dependent. An exact recipe for fear.

This is where democracy can go wrong. With fear, and without a deep familiarity with logical debate, we have shouting matches based on emotions. And topics which then whirl about in dizzy fits of fear and rage, especially about immigration. No refugees (“who will pay for them”), no immigration (“taking our jobs!”), no people who are a different colour or accent or gender or sexual orientation. A ‘fight’ reaction is frightening when it is combined with weapons – guns, bombs, or, in recent times, cars and trucks weaponised to kill people. Almost anyone with access to a car may be ‘armed’. Fear engenders more fear: the conflict escalates.

Human nature has not changed in many hundreds of years. We continue to wish to survive, to take care of our young, to have social bonds. The emotional motivations for our actions has not changed. Our political systems mostly depend on debate, but debate which avoids the pitfalls of emotion through fallacies. Our democracies depend on the policy-makers staying above the swirl of human emotions when they make policies. We need to turn away from ‘rabble-rousing’.