Last week, the United Kingdom (UK) government confirmed that they will fund the construction of a wall in a plan to prevent refugees from jumping onto vehicles crossing to Britain. This will be one more wall, adding to the five dozen walls which have been built around the world, to keep one set of people from access to the land, and resources that another set of people feel are theirs. Critics of the Calais wall point out that it addresses the wrong part of the problem of people gathered in Calais to try to cross to the UK. Who are these people, and why are they trying to jump onto trucks to get to the UK?

Theresa May, in 2015 as Home Secretary for Britain, described the people camping in the Calais ‘jungle’ as economic migrants, primarily from ‘safe’ African countries like Eritrea. In fact, the BBC has reported that many are refugees seeking asylum. Mis-classification helps prevent the public from calling on its government to show more compassion. Eritrea is a good example: it has been wrongly categorised by the UK government as safe. An independent review of the UK Home Office advice in January 2016, highlighted use of discredited sources leading to conclusions undermining asylum seekers’ concerns of persecution if returned to Eritrea. Sadly, the most recent (April 2016) advice on the Home Office website, still relies on the same discredited sources. In contrast, Amnesty International and the United Nations Office of the High Commissioner for Human Rights have reported on many human rights violations in that country. 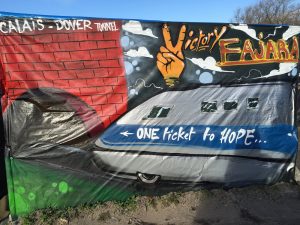 So, perhaps the UK should first re-consider its assessment of people who wish to come to the UK: refugees (seeking a safe place, asylum) rather than migrants. The British Red Cross outlines the difference: a migrant chooses to come to a new country, for work or another reason like love or to experience the place. A refugee, in contrast, flees persecution or violence. And an asylum seeker is someone who is fleeing but whose claim to need asylum has not yet been confirmed. A 2016 survey by Medecins Sans Frontiers (Doctors without Borders) shows that the majority of people in the jungle in Calais are refugees from war-torn areas. Should we not give them a sanctuary?

Why not stay in France?

One aspect of the refugee crisis now (and probably in the past), is that the people who are seeking asylum have their own desires and opinions. So, for example, people who speak English may, understandably, feel it will be easier to find paid employment in an English-speaking language. To work in France, one may be expected to speak French, and that could be a barrier to staying in France.

In addition, humans are social animals. In seeking a decent life, people may aim to find a family member or a community where they may feel at home. Some of the asylum-seekers in Calais are said to be trying to join family members who are already in Britain.

To claim asylum, one must already be IN the UK

In order to claim asylum in the UK, a person must be at a UK port of entry or already in the country. However, when coming from France, this is almost impossible: the United Kingdom and France have agreed a bilateral treaty which permits each country to have immigration officers in the other’s nation. And yet the treaty text specifies that asylum cannot be claimed to the UK immigration officials working in France, but only after the ship has departed. Thus, people who wish to claim asylum in the UK, must try to get on the ship, or across the Eurotunnel, before speaking to immigration.

So, it seems that in order to make an application for asylum in the UK, one must first be in that country. In order to be in that country, one must already have evaded the UK immigration officials who are placed in external countries such as in France. This sounds to me like a double-bind.

Forcing people who wan to claim asylum to enter illegally is not only unfortunate, but it permits them to be tarred with the brush of ‘illegal migrant’ . There are many references to illegal migrants in the British media. A study by the Migration Observatory examined correlations between numbers of migrants over time, and crime trends: the conclusion was perhaps a small drop in crimes against property, and no change in violent crime.

“We can’t be expected to host such numbers of refugees”

There is a terrible crisis indeed in the world, and, globally, over 65 million people are displaced, fleeing war and human rights violations. The proportion welcomed onto UK soil has been dropping for some years, and is ranked below the median in a comparison of new asylum claims across EU Member States at 494 new asylum claims per 1 million population.

The United Nations High Commissioner for Refugees (UNHCR) estimated in mid-2015 that over 33,000 people are forced from their homes every day. Out of an average of 24,000 asylum applications per year in the UK, about a third ( 8,300) are granted (or given humanitarian protection) over the last ten years either as a first decision or on appeal. It is a drop in the bucket – but every drop counts. We should keep in mind that food and security are some of our most basic human needs.

Although we in Europe are aware of the enormous growth in numbers coming across the Mediterranean into Europe, in fact developing countries host four out of five refugees in the world. Pakistan, Turkey and Lebanon are each home to more than a million refugees – comparable to the refugees in the whole of Europe. Less than one per cent of the world’s refugees live in the UK, according to the Red Cross. The 20,000 Syrian refugees promised to be resettled in Britain by 2020, are not coming from these crowded camps but are selected from the region.

Theresa May has said in at least one speech, in July 2016, that the UK should contribute by giving aid to camps located in Jordan and elsewhere, not by accepting any refugees. In the same speech, she referred to a press of economic migrants who would enter Britain illegally if they could. This lack of compassion is very unfortunate. She then scrapped the ministerial post for newly arrived refugees from Syria. The more we build walls instead of offering compassion, the more our inaction exposes people fleeing war to violence in the Calais jungle, the more we are creating a world of conflict and damaged psyches. Is this the world we want? Meanwhile, non-governmental organisations are calling for an expansion of the safe and legal routes to reach sanctuary in Britain as well as elsewhere.

The crisis of large numbers of people seeking sanctuary in southern Europe has meant an enormous burden on an impoverished part of Europe. Provisions for refugees are meagre. And may not provide safety. One can imagine how some, with English skills or with family in Britain, made their way across land to try to find refuge in Britain. And we who are not running in fear of our lives, who do have homes to go to, we must stretch our compassion a little. Help provide asylum for those who seek it. Know they will often stay a few years if they can go home. And help to support those who seek to re-construct this shattered part of the world. Let us not wall them out: it will impoverish us as well as them.